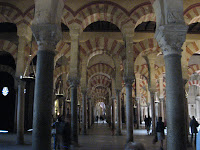 Mosque in Cordorba, 12th century
Visited Cordoba today. Great former Mosque, now a church. In the ~16th century a cathedral church was put right in the middle of the existing Mosque, bad idea, even though the cathedral is spectacular in it's own right. The Mosque was built in 12th century. 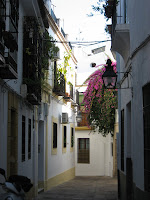 Cordoba has what is termed a Jewish district, very narrow streets like a labyrinth, easy to get lost. 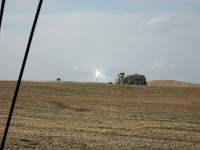 Heliostat tower shinning brightly in the distance. Mirrors too far away to see.
On the road to and from Cordoba we saw a Heliostat in operation. Mirrors focusing the sun into a central tower that then is turned into electricity by steam turbines.
Posted by Jack at 1:15 PM