The New Hampshire landscape presents dense forests with embedded beaver ponds at almost every turn.  In mid summer the ponds are often full with water plants, water lilies and grasses and other plants that are by themselves striking.  I have made photographs from time to time in the Joe English Reservation in Amherst, Beaver Brook in Hollis, the Heald Track in Wilton, and in the Monson Track in Hollis.

The beaver pond in Beaver Brook in Hollis exhibited strong reflections of the skylight from the lily pads and areas of the water that made the central part of the image very high key.  This contrasts with the near field dark tree, and the lighter foliage and stones in the foreground, and the shoreline trees in the background.  The result is a very dynamic image over layered by the shapes of the foreground dead tree trunks.

The image was made with a Cambo 4x5 mono-rail view camera and printed with pigment ink on Hahnemülhe photo rag paper (308gsm weight).  Image size 20" x 15.3".

This image of birch trees was one of several I made on the lower part of Mount Monadnock.  The contrast of the white birches and the darker foliage is of course striking and the feathery ferns adds a delicacy to the image that is appealing.  The resonance of the curves of the tree trunks gives a dancing quality to the image implying a gentle swaying motion.

The image was made with a Cambo 4x5 mono-rail view camera and printed with pigment ink on Hahnemülhe photo rag paper (308gsm weight).  Image size 18" x 15". 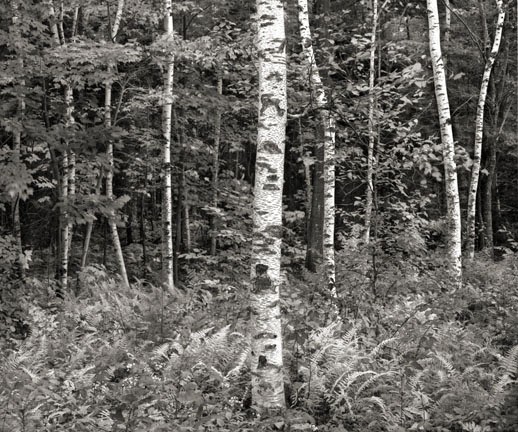 In the spring the forests are full with fresh new growth and they teem with contrast and light.  In this image I framed the scene with the central dark tree in the center and what might seem like two paths, one on either side of that central tree.  The birch tree on the left of the center tree creates a subtle difference in the two paths, as does the somewhat brighter and open forest on the right, and makes me think of Robert Frost's poem "The Road Not Taken" even though the choices here are barely even paths.

The image was made with a Cambo 4x5 mono-rail view camera and printed with pigment ink on Hahnemülhe photo rag paper (308gsm weight).  Image size 20" x 15.6".

Our garden in Amherst has many flowers that I use occasionally as subject matter for photography(see for example a previous post).  The image "Rose" was made in 2000 in situ and printed in the wet darkroom on silver gelatin paper. The delicate white pedals and high key gradations are in sharp contrast to the background of dark leaves and ground.  The rose floats above the background providing a glowing innocence although the form of the rose is somewhat irregular.

Photographing along Long Cove, Nova Scotia in 1997 (see previous post) I made several images of the ocean water crashing into the rocky coast.  This image is a more tranquil time when the water swirled around the rocks and gave a more peaceful presence even when the dark rocks contrasted with the (momentarily) quiet water.  The foam aftermath of the waves creates luminous water, alive with light.  This image was made with an old (ancient) Calumet monorail 4x5 view camera and grey scale film.  The image was printed with pigment ink on Hahnemülhe photo rag paper (308gsm weight).

Preparations for my show at the Conservation Center in the Society for the Preservation of New Hampshire Forest are almost complete.  The show is scheduled to be installed on August 31 and will be open until the end of October, two months!  To complete the preparation I hope to put together a catalogue with a brief description of each photo.  The descriptions will be available at the show by scanning the QRE symbol with a smart phone, displaying a web page for that image.

To start the process I plan to describe the photos individually in my Blog and use that as the basis for the description in the catalogue and web page for that image.  The show has a goal of 40 images so I plan to post two a day and finish the process in mid-August.  This will also help in organizing the show and sequencing the images.

To start (in no particular order) are three images from Nova Scotia from 1997:

These three images were made at midday along the coast of Long Cove on the south shore of Nova Scotia in the summer of 1997.  I spent most of the day photographing the shore rocks, patterns on the rocks, and the waves.

The striking scenery of the folded and jumbled rocks and boulders on a largely vegetation free shore produced great enthusiasm in me as the rock patterns and shapes morphed into mental associations and a variety of emotions.  The viewers of theses images bring their own experience and background and will undoubtedly have their own unique experience.

The top two images were made with an old (ancient) Calumet monorail 4x5 view camera and grey scale film.  The lighthouse image was made with a Mamiya Flex 2 1/4 x 2 1/4 twin lens reflex camera and color film, rendered in grey scale.  All three images were printed with pigment ink on Hahnemülhe photo rag paper (308gsm weight).
Posted by Jack at 11:16 PM No comments: