Leaving very early from our hotel we traveled  by dirt/rock roads and then by dried up river bed to reach the site of a Hadzabe tribe camp.  The tribesmen were gathered around their campfire talking among themselves, having cooked their breakfast earlier.   The tribeswomen and their children were gathered around their own fire:  the children were eating a porridge like cereal.  After some time the men started another fire (to light their marijuana pipes) demonstrating a skilled fire by friction technique.  The Hadzabe is an aboriginal tribe, essentially hunter/gatherers, that have not changed their ways since pre-historic times it seems.  They total approximately 1000 members scattered over a wide area in Northeaster Tanzania. We went on a small hunt with them and they later performed a tribal dance, joined by the women and children.  We also tried out their bows for target practice. 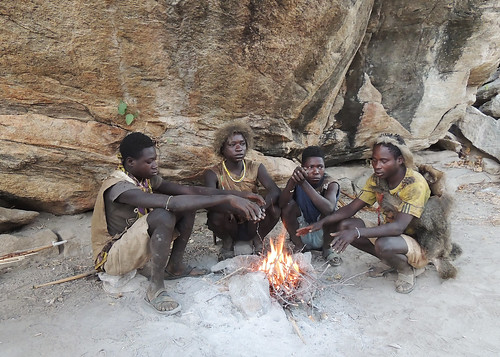